Time seemed to stand still. Moments shifted in front of her in a glitch. She was dimly aware of the ground moving slightly and colours merging. Then all of a sudden, she was standing facing the Space Twins. One was hidden but the other one was staring right at her with a look of such intensity that she had to look away. It was all over in a second but it was the longest second of her life. Everything shifted back into normal reality. She tentatively looked down at the shaking camera in her hand and wondered if she had caught a snapshot of the pair.

This artwork is logged on the blockchain with Known Origin.

He was always more of an After Hours Plato. Always going on about this law or that one, in his posh voice. She was never sure if he had actually been a lawyer in a former life, but eyeing up his shabby Tesco carrier bag and faded brown suit, she doubted it. He used to prop up the bar where she worked after school; it was a tiny old man’s pub, boring as hell but she needed the cash.

She never paid him much notice until one hot afternoon on the housing estate. She had been laughing with her mate about flunking school when the old man had suddenly stood up and shouted at her, “hey Tracy!, ” he pointed straight at her, “don’t you ever laugh about screwing up your school years. Plenty of us did that and look where we are now!” at this he slumped back down and slugged back his whisky.

She tried to laugh off his outburst but it really niggled her. She knew that she pretended to be thick at school, so she wouldn’t get bullied but how did he know that? She started talking more to him after that. Asking him about the stupid laws he was always going on about, asking him about philosophy and politics. Once her curiosity had been awakened, she couldn’t contain it. She had a thirst for knowledge that shocked her with its ferocity. No-one from around here ever talked to her like that and it was her secret. She had confessed to him that she would love to have been a lawyer one day but poor girls like her, with scruffy accents could never become lawyers. “I’m from the estate and it is too big a jump for someone like me. It is just a pipe dream.” He just shook his head at this.

However, their talks had given her a strange confidence to tune in at school. She had been shocked to discover that she had passed all of her exams with flying colours. She was actually the top of all of her classes. As she ran into the pub, breathless, desperate to tell him the great news, she was perturbed to find his usual place vacant. She asked the manager where he was. After Hours Plato was always in the pub!

“Dunno, love. He hasn’t been in all day.” the manager just shrugged. Well, he didn’t turn up all week and she was now seriously worried.

It was on the Saturday that the pub door opened and a very official looking man in a suit walked in. He spotted her straight away and came up to ask if she was Tracy. Handing her an envelope, he nodded and pushed a crisp white business card across the bar at her, “Call me once you have digested the letter and I will make the necessary arrangements.”

She opened the envelope, reading the letter,

I know you used to call me “After Hours Plato” behind my back, so I am leaving you two things. The first is one of his most famous quotes:

“Good people do not need laws to tell them to act responsibly, while bad people will find a way around the laws.”

So, I am leaving you something else. I am leaving you my estate which is substantial. Wealth, for me was inherited but money only brought me unhappiness. I hope that my wealth will enable you to go and be the lawyer you were always destined to be, but always remember your true wealth is your intelligence and that will never leave you.

From After Hours Plato to a Future Female Plato.” 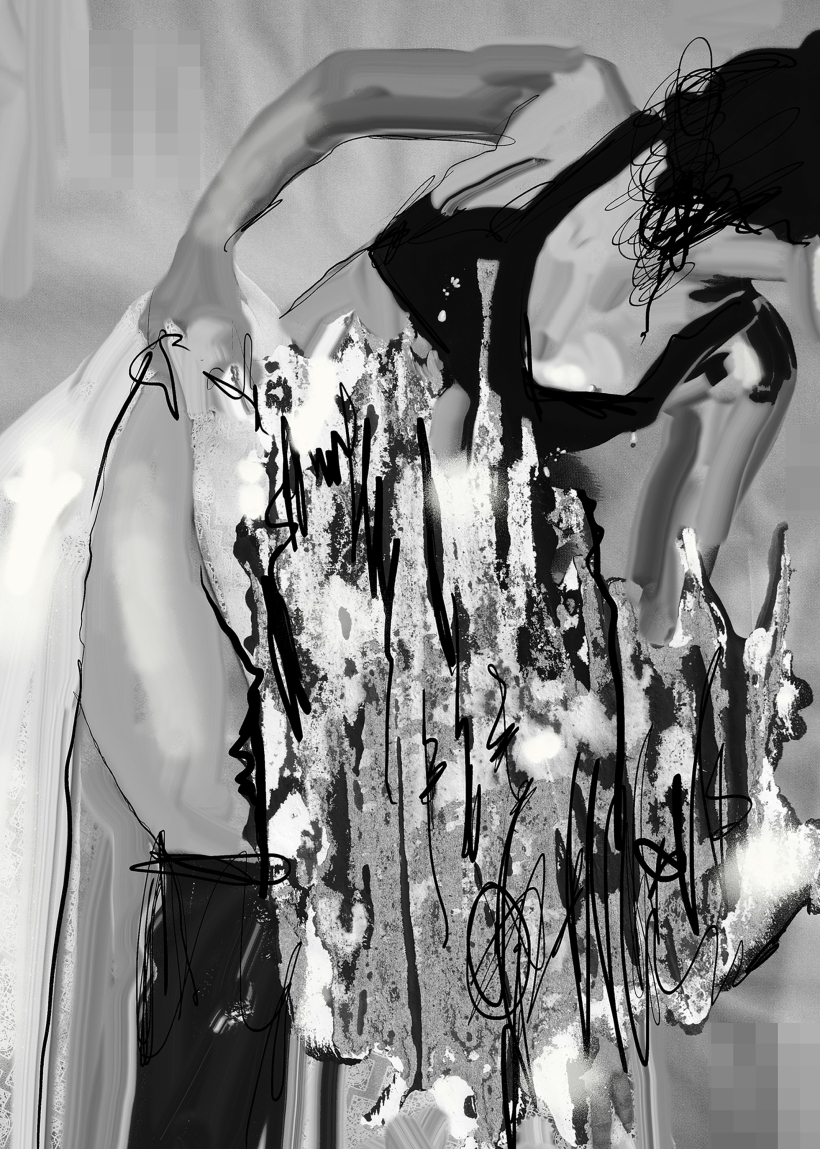 “Dancing in the heat.

“let me give you a little advice”…words lost in the warm, warm air…”

“Shivering in her failure of a raincoat, she sat down dejectedly on the stoop, when she spotted them. Shuffling up the street, the overly tall man had an ominous presence; someone she would normally avoid. He was dressed in a washed-out black suit that was ripped in places and his face seemed to be as dark as the sky overhead. She shivered into her coat but couldn’t take her eyes away. He was walking a sprightly Pekingese dog with a shiny sable coat and laughing eyes. The two were so mis-matched that she was compelled to watch them walking towards her.

Suddenly, the man’s eyes looked up and he stared her down with a look of pure darkness, “locked out, missy?” he hissed, tongue rapidly licking his dry lips.

“Yep. Just waiting for the key.”

“Aren’t we all?, ” he laughed and sat down on the stoop beside her. As he did so, the dog bounced up into her lap and panted hazily.

She darted a quick glance at him. He looked even more ominous up close. There was a smell of something. Something she couldn’t put her finger on but it wasn’t good.

“Seen you around here a few times, ” he smiled a crooked smile at her, “sitting on the street isn’t recommended, you know. You might end up speaking to people like me?” he wiped his nose on his sleeve at this and shook his head, “I am a disillusioned man and my only companion is a Pekingese doppelganger. You should avoid us, you know…”

She laughed, “I work with disillusioned men every day, sir, so I’m well used to it!”

Shaking her head, she stood up and started to walk down the steps, the Pekingese dog leaping ahead of her. His mention of “doppelganger” had disconcerted her. She had always thought that a doppelganger was a harbinger of bad luck in fairy stories. Well, maybe she needed to be a little more positive.

The man watched her walk down the steps ahead of him and he licked his lips again. Every single time. Every time, he warned them with the truth and every time, they laughed and petted the mutt.

[This is an excerpt from a short story that I wrote earlier this year to match the original ink drawing that I created (below).]

Hiding true feelings. Mask of red slipping. True emotion pours out like bright red birds from her soul. Keep up the mask, don’t let it slip. Don’t let them see the soul but how could she hide something so beautiful?

Let them fly, birds of the soul…

Concrete concourse, splash of grey suburbia ruining her white Armani suit. She had fought her way out of grey monotony, but today, looking down on the stains, she realised that no amount of luxury thread was going to hide the concourse of grey concrete that was her very backbone. 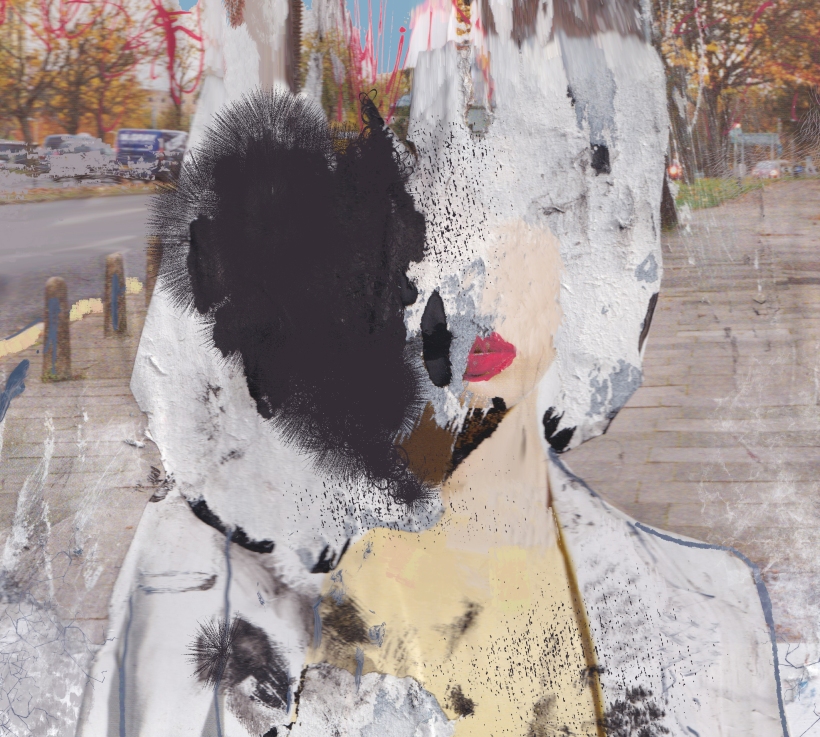 The place that had made her would also have the ability to break her. And, that was a concrete fragility she had no interest in. 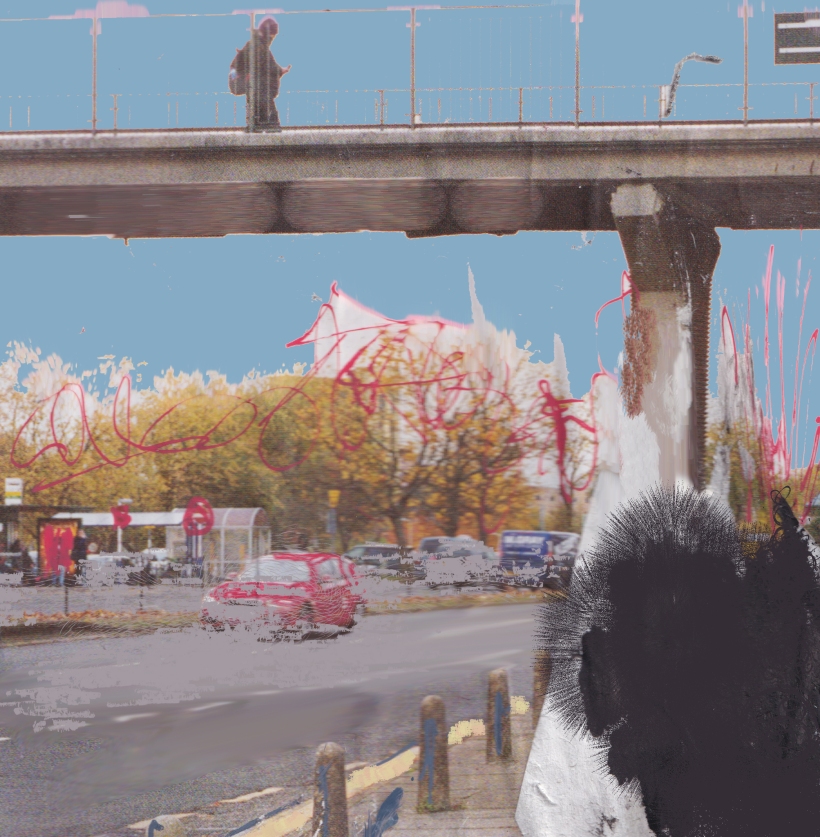 That is the real reason you can’t go back.

Fluorescent attitude with an edge of town sneer. She had paid a lot to look this smart but her true colours always showed. Inner punk threatened to punch out of that designer disguise.

BOURGEOISIE PUNK – now tokenized on the blockchain through Known Origin 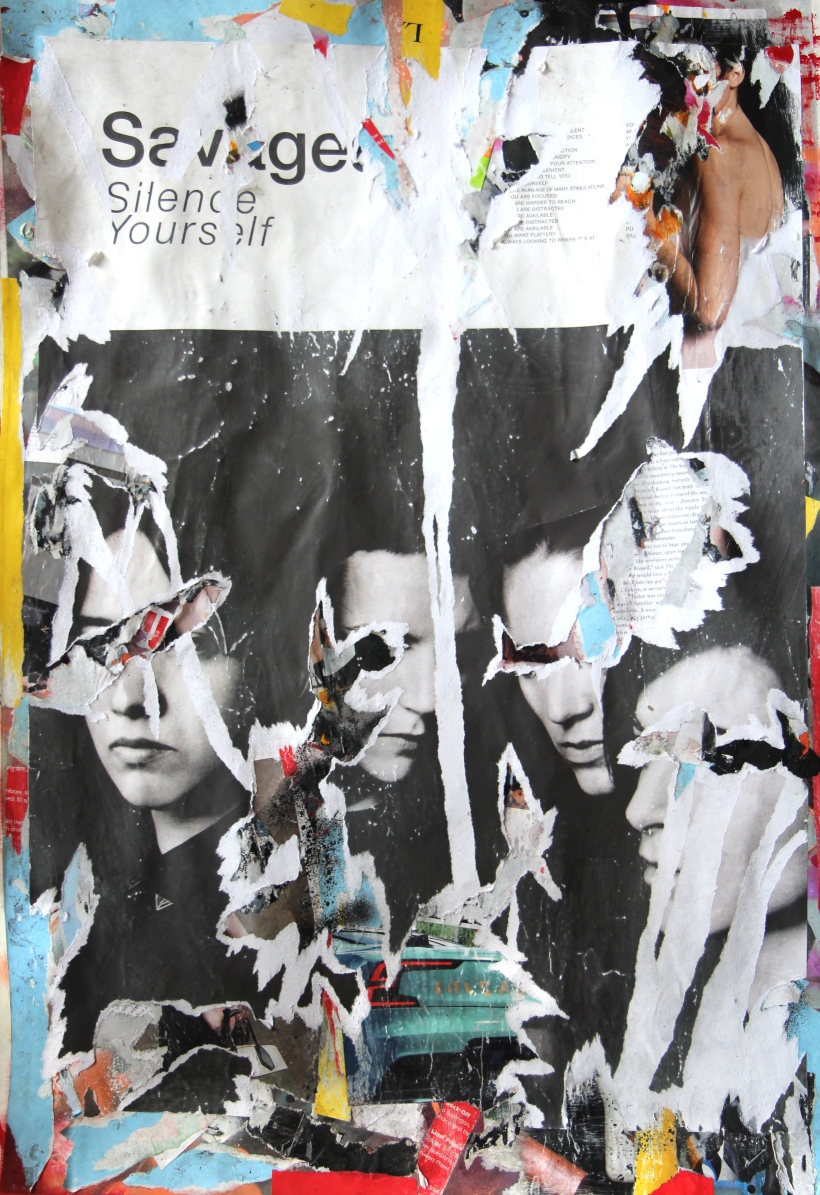 The Savages came in their hundreds, war-worn and brutal, pouring over the barren landscape.

She watched them from behind the barricade of pretty words. She was “harder to reach”, “distracted, but “available”. “She wanted flattery”. Apparently. But the words could not hide her for long.

Their eyes were hidden behind masks of rips and tears. An army of broken humanoids.

They had an easy mantra – “Savages, Silence Yourself” and they would hum it over and over again as they poured through the battle grounds. 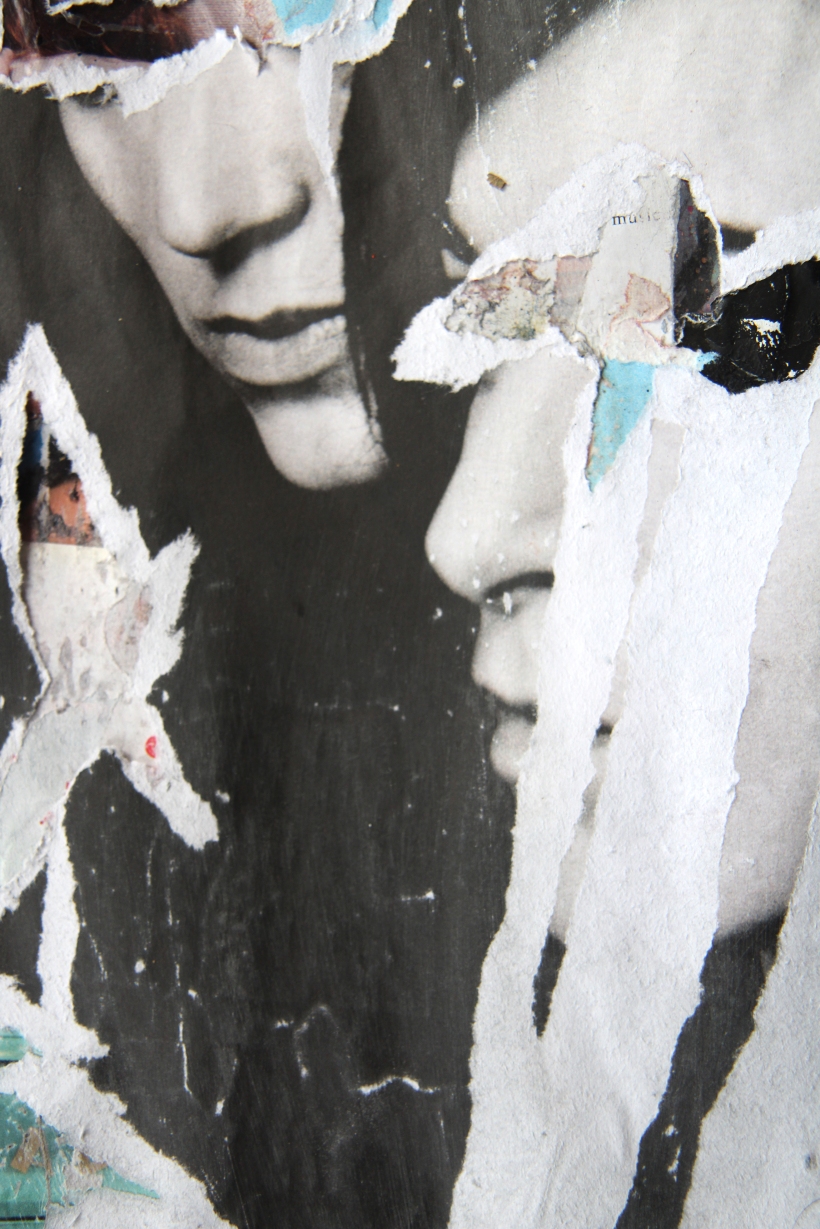 She wished she could see their eyes; search for some kind of humanity left. But it was futile. The Savages were here to stay and her hiding places were running out. 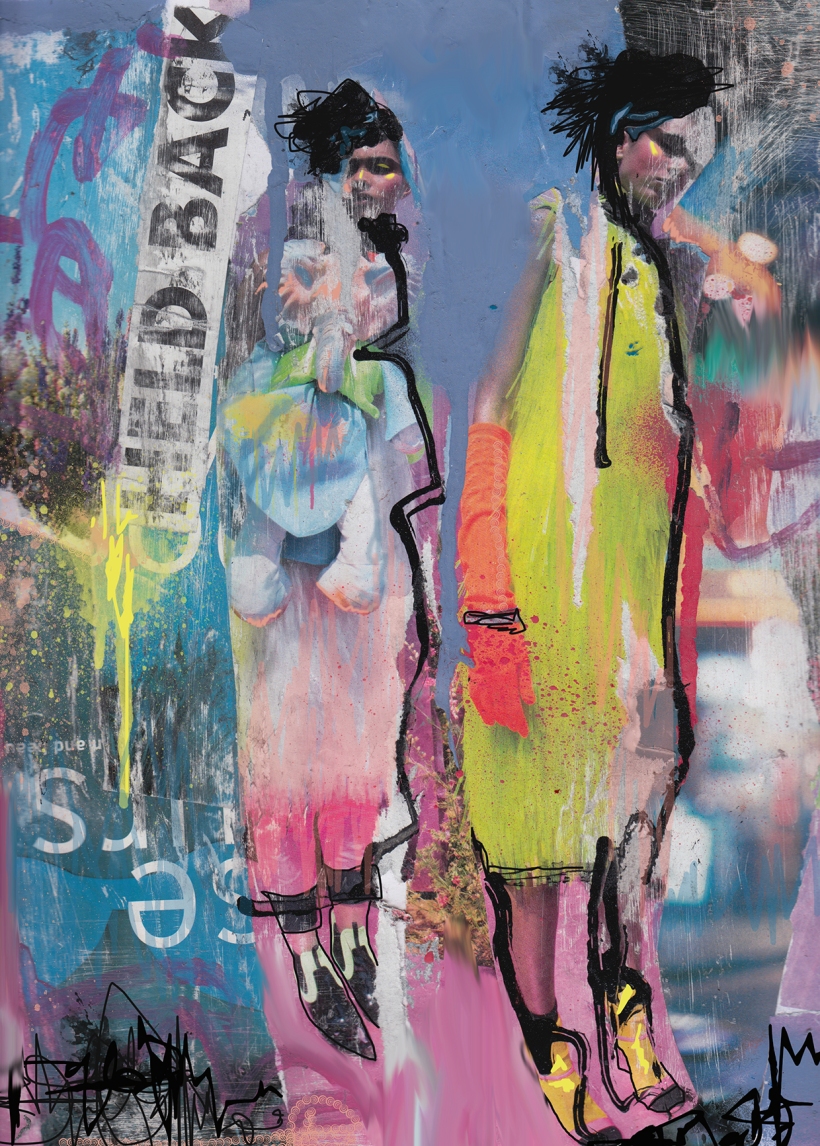 The women streamed in one by one. Lurid neon oilcloth dress and masks their only uniform.

Graffiti protests lined the walls but their power was stronger than petty words. 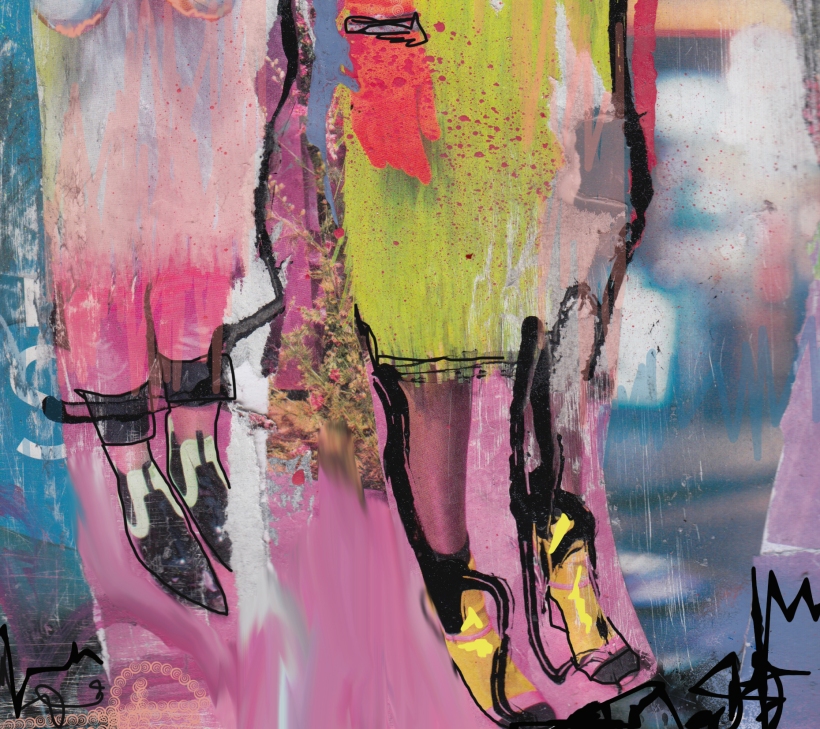 Masks hid disobedient eyes and their mouths held a silence that was deafening. 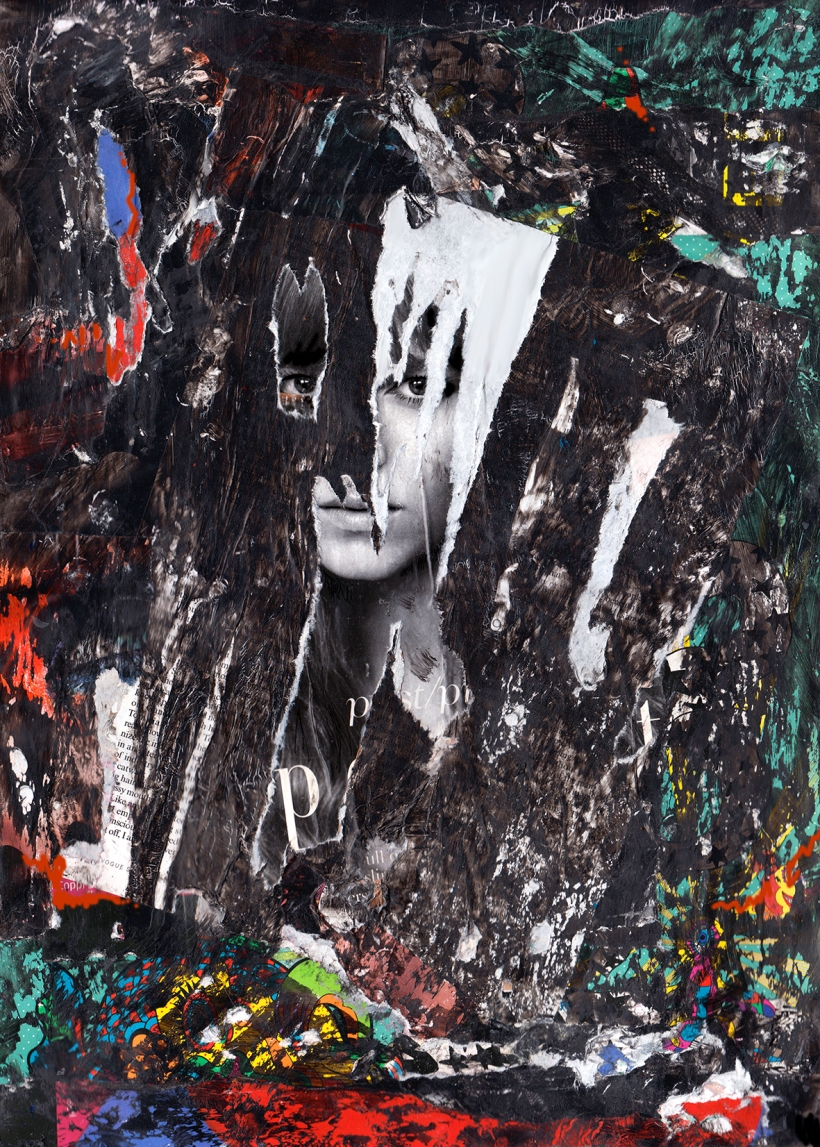 She was The Hidden.

It was important to keep her mask on at all times.

Her knowledge was sacred.